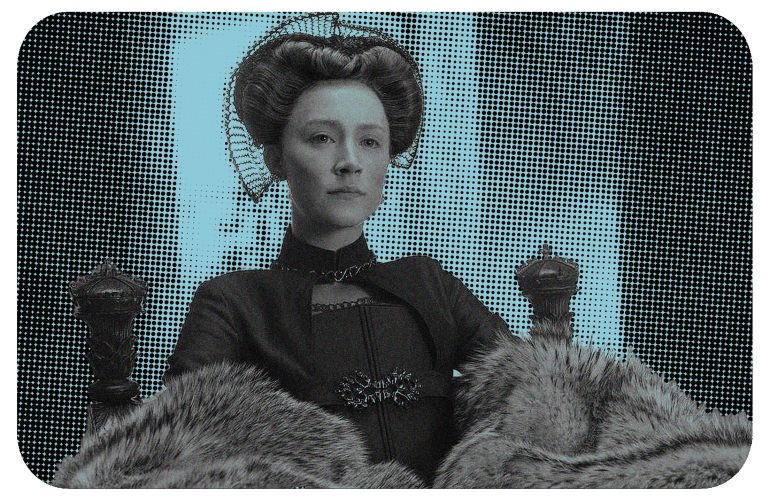 Mary Queen of Scots is a sumptuous period tale of marriages, murders and betrayals, dramatically pitting the Catholic Scottish Monarch Mary of the House of Stuart (Saoirse Ronan) against her cousin, Queen Elizabeth I (Margot Robbie), last of the Tudor monarchs of England.

The film begins with Mary’s return to Scotland to assume her throne after the death of her husband, the King of France. She takes over from regent half brother James Murray (James McArdle) and immediately creates an imbalance between Catholic and Protestant factions in both kingdoms. Her nobles bridle at their headstrong new Queen and her insistence that she lays a claim to England’s crown, demanding she be named heir apparent if Elizabeth produces no offspring. To strengthen her claim she rejects Elizabeth’s suggestion she marry Protestant Robert Dudley, 1st Earl of Leicester (Joe Alwyn) and opts for the superficially charming but opportunistic and insecure Lord Henry Darnley (Jack Lowden). The young but confident Mary has her hands full thwarting rebellions led by her treacherous nobles. Meanwhile in the court of Elizabeth, her privy council urge her to destabilise Mary to prevent a Catholic takeover in both kingdoms, with her confidant William Cecil (Guy Pearce) counselling – “It is either civil war here, or civil war there”.

Screenwriter Beau Willimon and director Josie Rourke have crafted a film of 16th century palace intrigue, gender politics and religious sectarianism that is believable even if it isn’t strictly accurate. Inevitably this story contains too much history to pack into 2 hours, with a timeline that spans decades and alliances that regularly shift. It is a film that is carried by its stellar cast and powerhouse performances, but its pace and complex though colourless storytelling occasionally pull up short.

The release of the initial trailers showing a face-to-face confrontation between the two monarchs ruffled the feathers of a few history experts but as this blog learned from interviewing Prof Tony Pollard about Outlaw King, the film world isn’t too precious about history. It’s also not the first film to have invented such a meeting between Mary and Elizabeth for narrative purposes.

The final tête-à-tête between Mary and Elizabeth is superbly acted but overly theatrical, with Mary and Elizabeth conversing between sheets of hanging muzlin, a decision probably owed to Rourke’s background as the director of London’s Donmar Warehouse theatre. It would also be a travesty were the searing talent of Margot Robbie and Saoirse Ronan not allowed to share some screen time. However, the scene does feel like it has been transplanted from the stage version of the same script and exists outside the narrative world that has been created.

Ronan injects incredible steel, passion and pride into her character, who never shies away from confrontation, whether against her all male council or the more powerful southern monarch. Robbie has the more difficult role, as Elizabeth’s scenes are often wordy expositions of geopolitics driving the story. Even still, as Elizabeth she has pathos and vulnerability when facing the societal pressures put upon her by royal convention – Elizabeth is unmarried, has no heir and laments she is “more man now than woman”. Robbie invokes surprising pangs of sympathy for a character many will have entered the cinema expecting to be wholly villainous. 21st century feminist ideals are projected on to this historical context to give us two female leads, supreme rulers no less, standing tall in what is traditionally a man’s world.

The supporting cast is well populated with UK and Irish talent. Most eye catching is Jack Lowden as Darnley, who’s character has a revealing arc and offers some insight into the possible sexual appetites of the time. David Tennant is similarly magnificent as fire and brimstone preacher John Knox – leaving no doubt there should be more roles where he can scream the epithet “Strumpet!

Cinematographer John Mathieson has taken some inspiration from the great watercolour landscapes of the 16th century, capturing sweeping vistas of Scotland as well as the inky black interiors of castles. Certainly this is another piece of cinema that will boost Scotland as a destination for film tourism, and composer Max Richter also treats us to plenty of regal scoring and martial drums when war threatens.

Whilst not being 100% true to history (and neither should it have to be) Mary Queen of Scots brings us enjoyable portrayals of well worn historical characters from top class talent, even if the narrative is sluggish in places