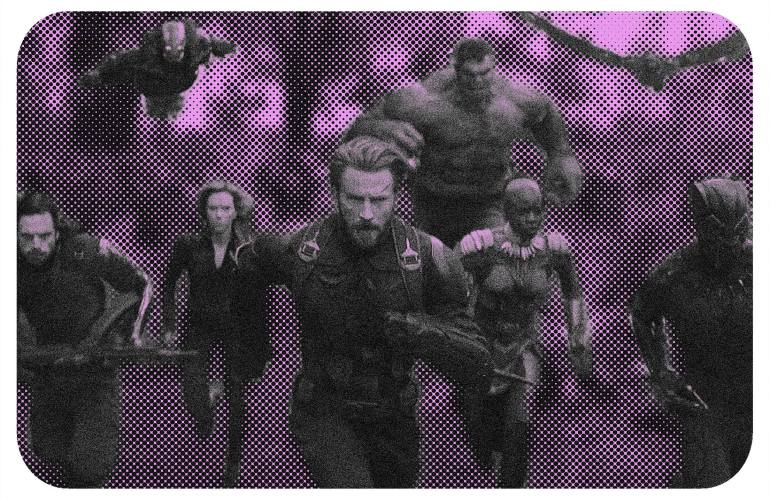 The Marvel Cinematic Universe peaks as the band of heroes take on an evil villain threatening intergalactic annihilation.

Infinity War, the latest instalment in the Avengers series takes place several years after the events of 2016’s Captain America: Civil War. The Avengers are as fragmented as ever and scattered across the world but find themselves forced to reunite when previous adversary Thanos’ quest to collect the infinity stones nears completion.

Accordingly, the Guardians of the Galaxy join the less terrestrial side of the cause, who alongside the Wakandans and Black Panther, complete a cast that is absolutely stacked with the biggest names in cinema. It’s quite an achievement to have such a massive ensemble work so well together when every character requires separate motivation, but that’s exactly what the Russo brothers have pulled off. Everyone is present and accounted for yet there isn’t a sense of everyone merely getting their 15 minutes of fame. IW feels like a cohesive story where some of the less relevant superheroes and characters are finally given a bit of perspective within the bigger picture of the MCU.

Infinity War begins with the second invasion of New York, where Dr Strange, Tony Stark and Spiderman are immediately thrown into the action. Meanwhile Thor joins forces with the Guardians of the Galaxy en route to forge a new weapon capable of destroying Thanos, and back on earth Captain America rallies the forces of the Wakandans in a bid to prepare for an invasion. From the plains of Africa to the far reaches of mythical space, the two forces collide on every scale and rarely relent in their fast pace and plot progression.

Generally speaking, Infinity War is Marvel’s best picture and knows it’s strengths. Beautiful visuals, snappy dialogue and it most importantly doesn’t waste time on well established characters. Much appreciated too is the score from Alan Silvestri, ditching the tiresome cliche foghorn blasts to highlight his tentative strings. Not so great are Thanos’ half baked theories to justify his genocidal tendencies and the stream of characters forced to decide between a loved one and the greater good. The handful of times Thanos’ logic is questioned involve some sort of philosophical rambling and flashbacks of his tumultuous relationship with his daughter. The film’s emotive elements are undoubtedly its weakest part. Despite these blips, the plot is well woven between the various individual stories and paced neatly though the many, many different locations. By this point, Marvel knows what does and doesn’t work and are exceedingly good at crafting it. Peter Quill’s humour, Steve Rogers’ stoicism and everything in-between are all calculated elements of a very entertaining film.

Clocking in at 149 minutes, Infinity war is definitely on the less child-friendly end of the superhero spectrum, but that won’t hold it back from making serious money. Marvel’s decision to release the film a week earlier than scheduled only speaks to the strength of the film and every week Infinity War is in cinemas will edge it closer to inevitably breaking box office records. That being said, IW deserves particular praise for breaking the superhero mould by actually adding an element of danger, long missing from Marvel. Very early on it emerges that all rules are off for this one and the genuinely jaw dropping ending will have fans cursing every single day until the sequel is released. The hype for part two starts here.

A welcome change in tone from the Russo brothers as Infinity War delivers on the promise of genuine consequence which has long been the achilles heel of Marvel’s cinematic efforts.

Editor. View all posts by euanfoley