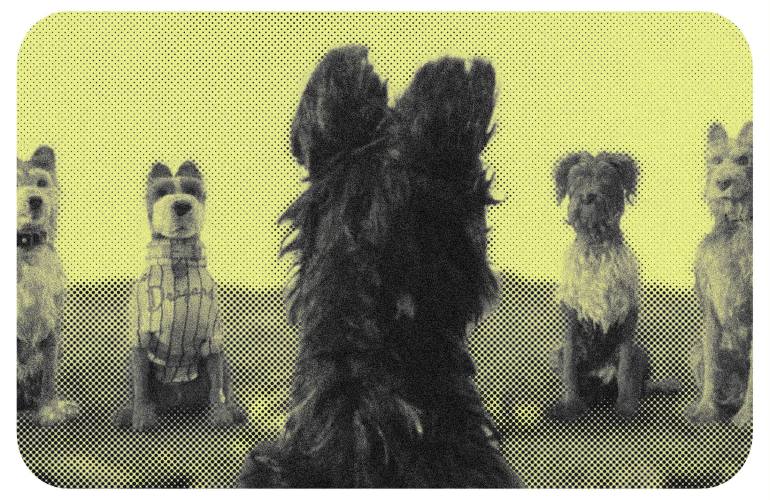 Wes Anderson’s oeuvre is a genre unto itself, with the name of the director serving as a shorthand for an accessible mode of twenty-first century auteur filmmaking. Anderson’s distinctive trademarks of extreme close-ups, dolly zooms, whip pans, and symmetrical composition have proven so singular that Anderson’s tastes and iconography arguably constitute a kind of gateway drug for casual film consumers to the esoteric realm of academic film studies – watching The Royal Tenenbaums at an influential young age served as a formative introduction to concepts of camera movement, framing and composition, not to mention the value of a British Invasion soundtrack. The consistency of Anderson’s idiosyncratic visual eye across his films, shorts and commercials has earned him acclaim and detraction in equal measure. While criticisms against Anderson are often levelled against his upper middle-class bias and his man-child protagonists, his ninth feature Isle of Dogs has awakened a familiar debate over the responsibility of representation and cultural appropriation which has engulfed discussions of the film since its premiere at the Berlin Film Festival earlier this year.

Isle of Dogs is Anderson’s second animated feature and just as his first, the Roald Dahl adaptation Fantastic Mr Fox, is also rendered in stop-motion animation with the aid of miniature puppets. Twenty years into the future in the Japanese metropolis Megasaki City, the cat-loving Mayor Kobayashi contrives an outbreak of snout fever amongst the city’s canines with the potential to crossover to the city’s human residents. The mayor summarily banishes all of the city’s dogs to an offshore trash island, aggravating student protestors led by foreign exchange student Tracy Walker (Greta Gerwig) and inspiring the Mayor’s young orphaned ward Atari (Koyu Rankin) to set off in a plane to the titular isle in order to rescue his beloved bodyguard and companion Spots (Liev Schreiber).

It is unfortunate to report that Isle of Dogs plays into the hands of Anderson’s critics who bemoan the director as an emotionally compromised, glorified set dresser. Anderson’s filmmaking is as technically assured as ever though, boasting several sequences of immaculate, Kabuki theatre-inspired art direction comprising a welcome respite from the autumnal palette and Anglo-American milieu of his previous work. Additionally, the puppetry is the film’s crowning technical accomplishment, with each of the adorable dog models conveying a physical heft, texture and painstakingly achieved articulation that is reminiscent of the artistry in Aardman’s claymation output and the Rankin/Bass holiday specials.

However, Isle of Dogs deviates from the Anderson canon in several unfortunate aspects. The film is played noticeably straighter in tone and humour than Anderson’s previous deadpan efforts to the point of settling into an overtly laconic rut that struggles to extract even a titter, let alone a wry chuckle. Moreover, the problem of the film’s tone is compounded by the scattershot characterisation where few of the humans or dogs complete a meaningful character arc. Indeed, most of the dogs exist merely as vessels for delivering Anderson’s non-sequiturs or as cameos for Anderson regulars such as Bill Murray, Jeff Goldblum and Tilda Swinton. Of the canine contingents, only Bryan Cranston’s stray Chief approaches pathos. One of the common refrains amongst Anderson’s defenders is that beyond the clinical camerawork, there lies a genuine humanist ethos in his filmography. Whether it is the underrated levity of his dialogue or the weighty themes that drive the action of several films, such as the culmination of a gilded European age in The Grand Budapest Hotel, there is far more depth to Anderson as a storyteller than his style-obsessed reputation would suggest. Yet in Isle of Dogs, there is no meditative conclusion reached, leaving the film as about as philosophically ponderous as a run-of-the-mill Disney animation.

The insincere character work in Isle of Dogs dovetails with a perceived overall lack of care and sensitivity towards Japanese culture in his decision to locate Isle of Dogs within this specific, albeit fantasised context. Contentiously, some figures have even levelled charges of cultural appropriation against Anderson, with Will Toledo from Car Seat Headrest going so far as to label Isle of Dogs “racist” and “a movie that would appeal to literally zero people beyond [Anderson] himself”. These concerns are legitimate and have occupied a storied place in the critical academy since the publication of Edward Said’s Orientalism in 1978, and certainly, the character of Tracy, the white American foreign exchange student, leading the pro-dog uprising amongst the indigenous Megasaki citizens can easily be interpreted as reflecting the white saviour trope from Hollywood films such as Blood Diamond and Avatar.

Nevertheless, I am motivated to qualify these reservations surrounding Isle of Dogs and contend that the film ultimately errs more towards respectful homage, where the Japanese elements of Isle of Dogs are treated with a solemn respect rather than just Orientalist set dressing. Amongst the stacked cast of voice actors, the recognisable coterie of Anderson regulars are only speaking for the dogs (“All barks have been translated into English”); meanwhile, the film’s Japanese characters are played by actors of Asian descent – including Kunichi Nomura, Akira Takayama, and even Yoko Ono – who are crucially not ventriloquised via dubbing or with subtitles. The white-washed live-action adaptation of Ghost in the Shell, this is not.

A technical watermark for the stop-motion animation sub-genre that is enhanced by Wes Anderson’s typically pristine composition and art direction, Isle of Dogs deserves to break free from the stigma of cultural appropriation engulfing its release. Nevertheless, the scattershot character development and half-baked storytelling of the film leaves Isle of Dogs as the most disposable and frivolous entry in Anderson’s filmography.