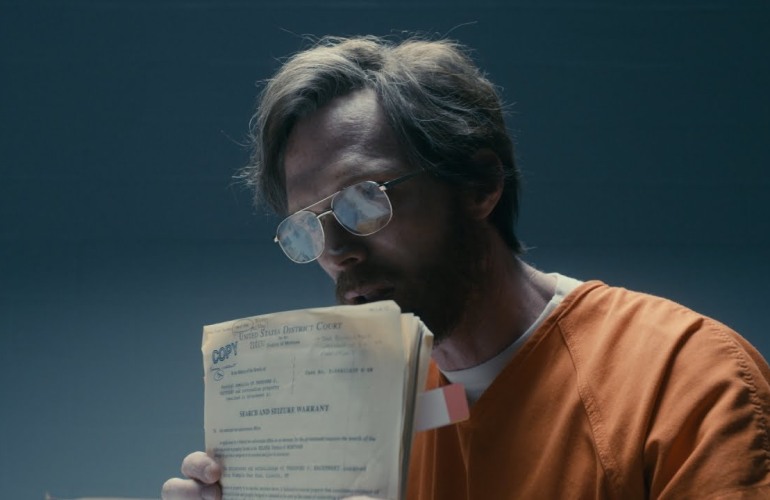 When it comes to TV thrillers, Unabomber is the full package.

Manhunt: Unabomber follows the true story of the longest, costliest and most exhausting investigation in the history of the FBI, the hunt for the serial mail bomber dubbed “Unabomber”.

Sam Worthington plays James R. “Fitz” Fitzgerald, blue-collar FBI profiler brought on to assist the Unabomber Task Force in tracking down their elusive quarry.  Paul Bettany puts in a tour de force as the acerbic Ted Kaczynski. In many ways the character is a welcome departure for Bettany, often cast in supporting roles or as a villainous British foil. Here he adds depth and nuance to a character we learn more and more about as the series progresses. The series is rounded out with strong supporting performances from Jeremy Bobb (Godless) and Chris Noth (Sex and the City).

As it is based on true crime the temptation is there to google the real case and discover the conclusions but this is worth resisting. As with most drama based on real events there are some historical inaccuracies but it’s worth enjoying the series for what it is before finding out more.

The first two episodes start slowly out of the gate and there is some temporal distortion present throughout, jumping back and forth between 1997 and 1995. The pace picks up, as in all good thrillers, towards the second act where we begin to learn more about the Unabomber and his manifesto. You’ll find yourself torn between willing on the FBI to nail the bastard and quietly not wishing to admit the validity of his views.

Gregory Tripi crafts a compelling soundtrack that throws out faint echoes of his work on 2011’s Drive. Malevolent synth beats build throughout a scene, injecting a cat and mouse ambiance to the investigatory revelations. When so many scenes hinge on watching characters work out word problems, what would otherwise make dull viewing is elevated to a pulse quickening watch.

However, Manhunt: Unabomber is not without its missteps. It leans a little on some tired tropes of the genre: the investigator that is so dedicated to his work he neglects his family, whilst also fighting the ‘bureau-cratic by-the-book tendencies of his colleagues. And, as this is made for Discovery Communications, the edit fades for commercial breaks are often noticeable compared to it’s Netflix stablemates. These are easily forgiven however, as it proves an otherwise terse and suspenseful thriller that will leave you wishing you loved your job so much that you had to sprint from the room at every epiphany.

The series’ final moments bring a down a doleful question on the audience like an unsettling mountain fog. It’s a feeling that lasts for several minutes after the credits roll.

Who is really in prison?

Manhunt: Unabomber is currently available to stream on Netflix.

Review // Uncut Gems . . . "Uncut Gems taps into viewers’ nerves right from the start and then gradually tears them to shreds as Howard Ratner, an eccentric jewellery store owner risks everything for the chance of winning big. In some ways, watching Howard is like watching a friend make bad decisions and not being able to do anything about it". Link in bio. Words by @tmoorering56 . . . #filmreview #filmtwitter #uncutgems #adamsandler #movies #oscars
Review // Doctor Sleep . . . "A seemingly impossible feat, Flanagan kills two birds with one stone in an excellent sequel that evokes pure horror with confident direction and writing, proving King adaptations can continue to shine onscreen again". Link in bio. Words by @tmoorering56 . . . #filmreview #filmtwitter #doctorsleep #ewanmcgregor #movies
Review // The Lighthouse . . . "The Lighthouse won’t be for everyone, but it’s the kind of film I’d like to see more of – bold, weird, and connective in a way that leaves its mark on viewers way after the credits roll". Link in bio. Words by @tmoorering56 . . . #filmreview #filmtwitter #thelighthouse #a24 #movies #robertpattinson #willemdafoe #roberteggers
Review // Ad Astra . . . "Even during moments of great intensity and greater danger, Ad Astra is never far away from calm collectiveness and deep thought, whether it be about the decisions of one man or the broader decisions of mankind". Link in bio. Words by @euanfoley . . . #adastra #bradpitt #movies #jamesgray #filmtwitter #filmreview #tommyleejones #review
Feature // Five Great Books Not Yet Made Into Films . . . Some summer reading by our team unearthed some treasures as yet un-filmed with a little digging as to why they've not made it to the silver screen. Link in bio. Art by @thomasdurhamdesigns . . . #movies #filmreview #film #review #books #infinitejest
Review // Once Upon a Time in Hollywood . . . Quentin Tarantino's latest film is a change of pace and marked evolution for the famed director, throwing everything at the wall with lots to enjoy and debate. Words by @euanfoley Link in bio. . . . #OUATIH #quentintarantino #movies #leonardodicaprio #bradpitt #filmreview #film #review
%d bloggers like this: